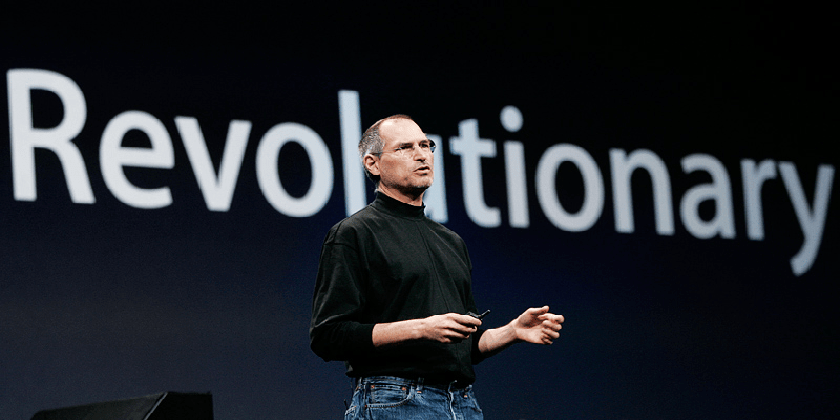 Get Inspired How to Top

I believe Steve Jobs‘ literally the most captivating communicator on the world stage. His presentations unleash dopamine into the brain of his audience. Therefore, we have seen people waiting in lines for days and nights to get the best seats to listen to him speak. There top 10 Ways to Present Like the Master Presenter Steve Jobs.

Also, when the of Steve Jobs’ absence was revealed on the keynote presentation at Macworld Expo in 2009, his fans threatened to protest. Then, even though expectation were nearly impossible to meet, by using Jobs’ techniques, Apple vice president Phil Schiller filled in for the legendary presenter. However, Jobs was still missed. Therefore, reporter Jon Fortt wrote:

“The sun is setting on the first generation of rebellious whiz kids who invented the PC, commercialized the Internet, and grew their companies into powerhouses.”

His presentation contains pretty much everything about a movie: conflict, resolution, villains, and heroes. And he takes care of every detail of a presentation including writing descriptive taglines, creating slides, practicing demos and making sure everything works almost perfect.

With that being said, no doubt, you too want to give a similarly remarkable presentation but it probably seems impossible. And keep telling yourself that there is nothing similar between you and the Master Presenter, then, how could your presentations be. But keep it in mind that Jobs wasn’t born with these extraordinary techniques. He learned these with struggle and with each failure of his life. You might develop better techniques if you learn to work harder and smarter and stay motivated even if you fail countless times.

Until then, you may need a guide as we all need in pretty much every point of our lives. So what could be better than a guide on How to present Like the Master Presenter Steve Jobs. Therefore, in the article below, I have listed the most outstanding techniques he used to amaze his audience.

Even though Jobs has revolutionized the entire world of bits and bytes, he still starts with a pen and pen. He spends most of his time brainstorming and mind mapping on a traditional paper and takes nothing for granted. To tell how mind-blowingly important a pen and paper is, Garr Reynolds writes in Presentation Zen:

“There’s just something about paper and pen and sketching out rough ideas in the ‘analog world’ in the early stages that seem to lead to more clarity and better, more creative results when we finally get down to representing our ideas digitally”.

So next time before you do anything, take a pen and a piece of paper and write down everything you have planned or planning to do in your presentation.

“Welcome to Macworld 2008. There is something clearly in the air today.”

And this was how Steve Jobs started the 2008 presentation- the introduction of an ultrathin notebook computer. And in 2007, he introduced the iPhone by saying, “Today Apple Reinvent the Pone”.

He always takes the guesswork out of a product by creating a one-line description, better known as the headline, that best reflects the product. In a nutshell, he creates headlines that are easy to remember, specific and tweetable. Hence, take a little time and think of a short and electrifying Headline, to begin with.

On January 9, 2007, “Today Apple reinvents the phone,” Jobs said as he revealed the iPhone for the first time to the public. However, until that, he created drama and suspense by telling his audience that Apple isn’t going to introduce one but three revolutionary products. He identified them as:

At this moment, everyone sat back and waited for further description and Jobs continued:

As a result, the audience went wild. So, it is not an agenda slide or anything else that makes his presentation at this point but his verbal Road Maps. Also, using a PowerPoint slide makes things a little boring and dim, hence, try to begin with a verbal Road Map.

Dress up Your Numbers

“We have sold four million iPhones to date. If you divide four million by two hundred days, that’s twenty thousand iPhones every day on average.”

On October 23, 2001, Apple launched the iPod that changed the entire music industry. However, it is expensive enough at $399 with 5GB storage which was very little storage for music lovers because there were several gadgets available out there that could store more than Apple’s iPod.

But it was Steve’s technique of dressing up the numbers that wowed the minds of his audience. Jobs said, “the new iPod weighs 6.5 ounces and is so small that it can fit in your pocket.”
When Jobs pulled one out of his own pocket, it immediately clicked with the audience. The iPod’s slogan said it all: “1,000 songs in your pocket.”

Hence, no matter how large or small your numbers are, dress them with something your audience can relate with because they are already familiar with. 5GB may not mean so much but 1000 songs in your pocket mean a lot.

Never Steve gave a presentation that didn’t include a villain (the problem) and a hero (the benefit). So, in 2007 when he announced the magical phone he first discussed the problem we all resonated with. He said,

“It works like magic. You don’t need a stylus. It’s far more accurate than any touch displays that’s ever been shipped. It ignores unintended touches. It’s super smart. You can do multi-finger gestures on it. And boy have we patented it.”

So, one of the techniques from Top 10 Ways to Present Like the Master Presenter Steve Jobsconsider your audience your customer and yourself a shopkeeper trying to convince them that your product is all they are looking for. Tell what is great about your product that they need to get it anyhow because until you sell their benefits they aren’t going to be interested in your product.

Before Jobs revealed the revolutionary iPhone, he sat back and reviewed Apple’s history of 1984 when Apple launched Macintosh which eventually didn’t only change Apple but the entire tech industry. Also, he didn’t forget to mention 2001 when Apple revolutionized the music experience by introducing the iPod.
No doubt telling stories have been the best mean of conversation; they are easy to remember and impactful in different ways and Jos was well aware of this. Therefore, before he announced the big picture, he would communicate with his audience through stories. But remember the stories his presentation and audience could relate to. Thus, tell impactful and relevant stories before you step into the big ocean.

One thing great about Jobs presentation is it’s easy to remember simple, visual slides. When he first introduced iPhone as the revolutionary mobile phone, he not only stuck to the rule of three but also he used simple images of the three revolutionary products: an iPod with touch control, a mobile phone, and a breakthrough internet communicator.

If you think that your audiences’ minds will wow if your slides are extremely beautiful and colorful, you are, no doubt, wrong. It isn’t about your slides but how you present them. So, the key to remember is Simple, Visual Slides.
Don’t give your audience time to get bored!

According to molecular biologist John Medina,

“The brain seems to be making choices according to some stubborn timing pattern, undoubtedly influenced by both culture and gene”.

Never Jobs give the audiences’ brain time to get bored. In every thirty minutes, his presentations included demonstrations, video clips or a second presenter or speaker. He’s well aware of the fact that even his gifts of persuasion can’t make a tired brain keep seeking for new stimuli.

Hence don’t overload in a very short period of time. Give your audiences’ brain time to relax and recharge to absorb enough of your presentation. You may include a third speaker, a video clip or any light, entertaining info to keep them engaged.

For an hour-long presentation, Jobs rehearsed for many hours over weeks before the launch of either it be iPod, iPhone or Mac. He never missed a beat, he knew every detail of every slide, every demo, and every font out there. Subsequently, his presentation went flawlessly.

So, practice! The more you can, the better.

No matter what Jobs always has fun doing it. He enjoys even though he has worked for hours without any rest: relentless planning and preparation, hours-long rehearsal, practicing every slide and every demo to get them all the right way. And he doesn’t allow any small stuff let him down.

In a nutshell, he is going to have fun whether a demo or a slide works or not. Therefore, no matter what you do to impress your audience if you don’t enjoy doing that, chances are they will soon get bored of it. Hence, do and say what you love and enjoy.

Jobs is still an extraordinary corporate storyteller, even if apparently he doesn’t exist among us. I believe he is still alive through his revolutionary products and presentations. Therefore, I have written the above guide on How to present Like the Master Presenter Steve Jobs considering him still alive.

Undoubtedly Top 10 Ways to Present Like the Master Presenter Steve Jobs are mind-blowing. I have tried my level best to explain them as much as I could. Also, I would like to mention on this point that we would keep updating this guide from time to time according to your needs. Until then, keep learning!

How to Write a Report With 10 Easy Steps

All Important Documents Checklist You Need Before Applying for a Scholarship

Most Motivational Quotes for students to Stay Motivated in Life October 5, 2018 at 1:42 am

[…] Write Keywords: Keywords are much better than an entire sentence especially when you sit to review later. Also, it is the technique the master presenter Steve Jobs used to use to give remarkably amazing keynote speeches. […]

[…] to stay inspired and motivated check out Top 10 Ways to Present Like the Master Presenter Steve Jobs or How to Take Notes in Class: 5 Best Note-taking […]

Reply
Actionable Ways to Skyrocket Your Presentation Skills | Study Guides November 3, 2018 at 10:08 am

[…] Honestly, Steve Jobs is the most captivating communicator and presenter the world ever encountered. His presentation almost has everything to offer such as action, conflict, villain, hero and more. To learn more about his presentation techniques, check out our Top 10 Ways to Present Like the Master Presenter Steve Jobs. […]